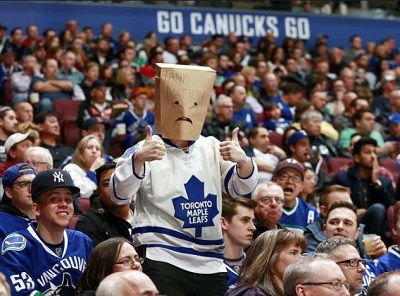 If you’re looking for a fantasy sport where correlation is key, look no further than DFS hockey. Much like a hockey line must work together to score goals, your fantasy team must link up players so that when one goal is scored multiple players in your lineup receive points.

Using quality daily fantasy hockey projections to identify which forward and center combinations to play, along with the proper defensive pairings, is key to seeing a positive return.

Don’t be left shut out by trying to build an all-star team, build an all points team and play off the value. Don’t be a sad DFS NHL player.

The first league to fully partner with a daily fantasy sports operator, the NHL’s November 10, 2104 announcement beat out the NBA by 4 days. The league has been an active promoter of the hobby, with Keith Wachtel, NHL Executive Vice President of Global Partnerships commenting on the NHL DFS partnership;

“”We are pleased to partner with DraftKings, a leader in daily fantasy sports, recognizing the direct correlation between fantasy sports and fan engagement, we look forward to providing our fans with a new opportunity to extend and enhance their NHL experience each and every day of the season.”

That comment happens to hold the key to DFS success, building an optimal lineup with plenty of direct correlation.

Using our projections, you’ll be able to construct a winning lineup for both cash games and GPP’s. Whether you use our top scoring projections to enter a 50/50, or our value plays to launch GPP bullets, you can be assured you’ll be building optimal NHL picks for your nightly puck fix.

Wayne Gretzky was heard to muse; “You miss 100% of the shots you don’t take”, but we’re certain he would agree that the taking a high value shot is far wiser than firing blindly.

Use our combined knowledge to pick the top scoring lines and most valuable goalies.

A Canadian built these projections. He lives hockey, even though it’s broken his heart time and time again. Luckily, his skill at making DFS picks lessens the blow of his team being without a Championship since 1967.

The last time the people of Toronto felt hockey happiness was May 2nd 1967. This turned out to be the final game of the Original Six era of the NHL, and not surprisingly, also the last time the Leafs both appeared in and won the Stanley Cup.

As is Maple Leaf tradition, once the going got a bit tough the team folds.

They’ve changed logos a few times, but oddly enough not back to the original green, otherwise known as the color of envy…The envy their fans feel every playoff season.

Team history claims a resurgence took place in the 1990s, but when that resurgence is Wendell Clark and Doug Gilmore, you can understand why hope that the Toronto Maple Leafs Stanley Cup Drought will end has been fleeting on Bay Street.

Nowadays they mainly focus on attempting to wrestle a high draft pick away from the Oilers, while focusing on what has amounted to a 49 year rebuilding plan.

Unlike the Leafs our projections are league leading, which you’ll quickly find out